Understanding how each DISC style likes to give and receive information helps us communicate more effectively.

By laying the filter of Transactional Analysis over DISC we can identify potential communication conflicts and better manage our expectations for an interaction with a friend, partner, colleague or employee. 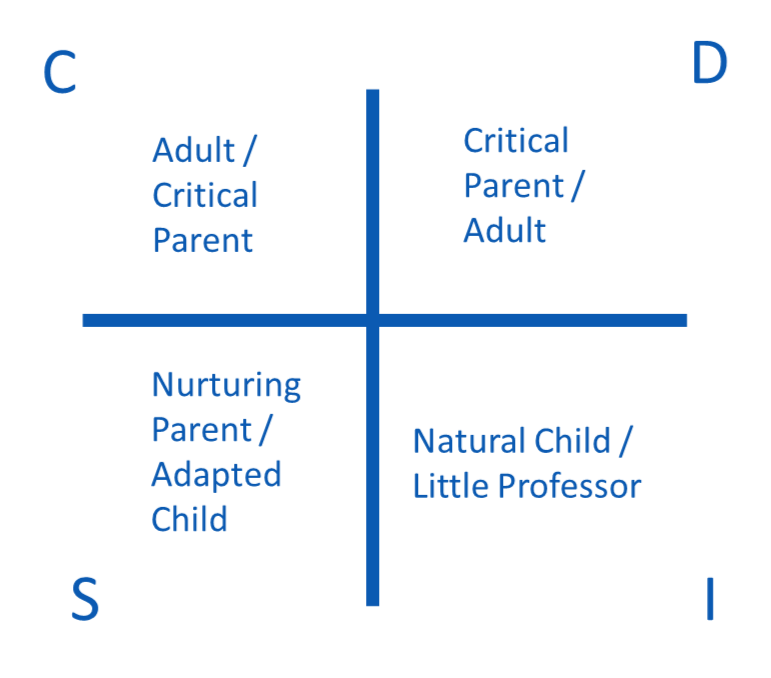 The theory of transactional analysis, first put forward by Professor Eric Byrne, states that all humans have three tape recorders or “ego states” instead us – the parent, the adult and the child. The parent and child tape recorders are split into two and three sub-ego states respectively. The parent has a “critical” side and a “nurturing” side and the child has an “adapted” (compliant) side a “natural” (playful/fearful) side and a “Little Professor/rebellious” (mischievous/angry) side. The adult ego state is a computer that takes in and sorts information.

With an Is preference to communicate in a fun, upbeat and happy way they tend to communicate from their Natural Child ego state, which sounds like “this will be SO much fun” or “hey guys, I’ve got a GREAT idea for a team building event.” When an I-dominant feels like they aren’t getting their communication needs met they will switch into Little Professor to get their needs met by playing games (e.g. “well, I’d love to help you with that project, but I’ve got so much to do.”

As they tend to be the most nurturing communicators of the four DISC styles, S-dominants’s default ego state is the Nurturing Parent. Because Ss fear disharmony in their group they will fall into the Adapted (compliant) Child ego state if they sense that going along with the crowd will keep their group together.

Don’t take the DISC/TA tie-in as an absolute. An individual’s preferred ego state has a lot to do with their first six years of life when their Parent and Child tapes are running. For example, I am D-dominant, but my preferred ego state is Nurturing Parent because I had an incredibly nurturing mother.

Also don’t use this information to analyze the person with which you’re speaking while in the middle of your conversation. We have a choice to either “react” or “respond” to a communication from another person. If you are reacting you’re likely communicating from your Critical Parent or Child ego state. If you are responding you typically communicate from your Adult or Nurturing Parent.

Understanding your preferred ego states will help you in responding instead of reacting.